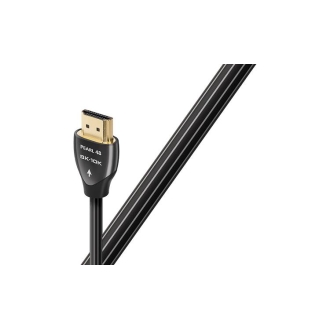 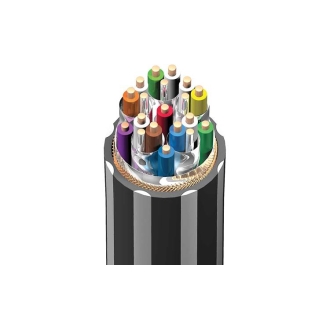 Making use of 4 audio/video pairs capable of 12Gbps, the Pearl 48G HDMI cable is capable of carrying up to 10K Ultra-HD video (it is, of course, still compatible with 4k displays). Whether for regular viewing or for gaming, this HDMI cable delivers highly on picture and sound quality.

This is the foundation of AudioQuest’s Noise-Dissipation technologies. Traditional “100% shielding” is not enough to guard against the increasingly prevalent effects of Wi-Fi, cellular, and satellite radiation. In AudioQuest HDMI cables, all 19 conductors are Direction-Controlled to minimize the RF Noise that damages performance by “directing” or draining it away from the most vulnerable circuits. Additional Noise-Dissipation techniques (Levels 2 and up) are applied as budget permits to further reduce noise.

This combination of technologies results in more realistic HDR images with greater perceived depth. Dynamic HDR (HDR10+ and Dolby Vision, for example) enables frame-by-frame HDR optimization rather than HDR settings that are fixed for the entire program. The most prominent current HDR formats are HDR10, HDR10+, and Dolby Vision.

AudioQuest 18Gbps and 48Gbps HDMI cables are compatible with all varieties of HDR, which can be found on Ultra-HD Blu-ray, and all major streaming services, including Netflix, Amazon Prime, Disney+, Apple TV+, and others.

Not only do all current generations of AudioQuest HDMI cables have the conductors and bandwidth required for eARC’s enhanced sonic capabilities, but, in order to ensure superior audio performance, the ARC-channel conductor-pair is internally controlled for direction, running in the opposite direction from the 4 pairs that carry information to the TV.

Finally, AudioQuest’s eARC-Priority models include 4 Silver-Plated Forest 48-level audio/video data pairs—but with a far superior single data pair for the TV’s audio output. By upgrading the ARC data path only, audiophile quality is made possible at a fraction of the cost of upgrading all 5 data pairs.