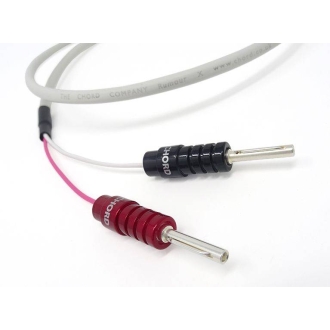 Chord Rumour was Chord's  second attempt at producing a speaker cable. The first two being Myth and Legend – copper and polyethylene flat cables in single and bi-wire configuration. Chord were also investigating speaker cables that used silver-plated conductors in combination with PTFE insulation. Chord had been experimenting with twisted pair conductor configurations, as at the time, heavy gauge parallel conductors were the standard for speaker cables. By twisting the conductors together, Chord could hear the noise floor of the system improve. Chord reached an ideal twist ratio and designed the cable around this.

When Chord launched Chord Rumour in 1996, it was one of the smallest speaker cables available (16 AWG). Retailers would take it into their demo rooms looking dubious and come out looking surprised and delighted. It sounded a lot bigger than it looked, it carried detail and dynamics really well and it was more coherent than just about any other cable around. As people got over the size and listened, rather than looked, it became a very popular cable. Apart from cosmetic changes it remained unchanged for many years.

Previous versions of Rumour speaker cables used PTFE insulation (often referred to as Teflon™) and until the arrival of Taylon®, this was Chord's “go to” material. Although expensive, PTFE offered the best performance.

Material technology is constantly developing and improving and alternatives to PTFE are now available. While the high cost of Taylon® prevents Chord from using this in all of their ranges, they were able to find a suitable family of insulation materials known as XLPE (Cross-linked Polyethylene). One version of this material looked particularly interesting and following listening tests, proved to be clearly better than the PTFE in Rumour speaker cable – now known as Rumour X.